In Discover Paris, Paris for the first time, Practical Paris, Where to stay in Paris?

Paris is a beautiful city full of architectural and historical sites… and many Parisian squares are part of it’s cultural heritage!

The city of Paris, or the City of Light for those in the know, overflows with wonderful places and each is more beautiful than the last. You will find nearly 500 different places in Paris! Among these many Parisian places, you’ll find below Lodgis’ selection of the 5 places in Paris you should absolutely visit. You can’t miss these 5 places because they are well-known, both to Parisians and foreigners. Come and see for yourself, they are really worth seeing! 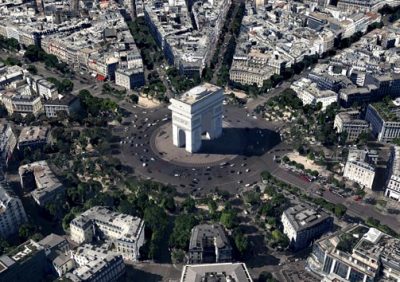 This square changed its name in 1970 (it was called the Place de l’Etoile until November 9th, 1970) following the death of Charles De Gaulle, arguably the most famous and charismatic President of the 5th French Republic.

But why was it once called the Place de l’Etoile? Because, from the sky (at the top of the Arc de Triomphe), the twelve avenues leading to the square form a star.

You’ve got to see this place and marvel at the famous Arc de Triomphe, which is located right in the heart of this Parisian square. We strongly advise you to climb up the Arc de Triomphe to see the amazing view of La Défense / Champs Elysées / Concorde / Louvre. The hustle and bustle of tourists around this place never stops, that’s how popular it is!

Place Charles de Gaulle: a flame that will burn forever

The Place Charles de Gaulle is an exquisite must-see monument, not only because of its star shape, but also because the Arc de Triomphe is a historical place.

This is where you will find the tomb of the unknown soldier, which symbolizes the people who died for the French nation, decorated with bronze and illuminated by a flame relit every evening at 6pm.

Each year, the commemoration of 8th May 1945, presided by the head of government, is held at this historical square in Paris.

Does living close to the must-see historical places in Paris sound appealing to you? Then don’t hesitate to take a look at our range of furnished rentals located in Paris’ 8th arrondissement near the Place Charles de Gaulle, but also the most beautiful avenue in the world: the Champs-Elysées! 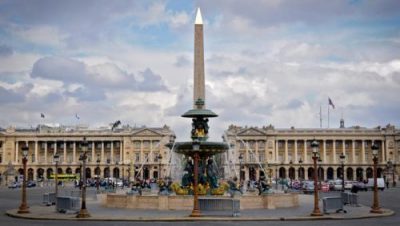 Note that this monument, which is 23 meters tall and very heavy (230 tons), is the oldest in Paris! It was built in 1836 on the Place de la Concorde, and the monolith dates back to 1300BC.

The Luxor Obelisk is next to the fountain of Place de la Concorde and was a gift from Egypt to France. Initially it was located in front of the Luxor temple, from which it gets its name.

This must-see place is considered one of the most beautiful in the city, which is why it is in our top 5 spots in Paris to enjoy a sunset! 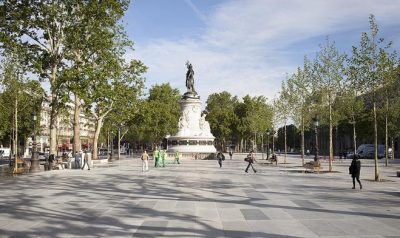 Recently renovated, the Place de la République is very popular with Parisians. Since its renovation, the pedestrian area is much larger. It can be reached by five metro lines (lines 3, 5, 8, 9 and 11) and joins together nine streets.

Erected on the Place de la République is a colossal bronze statue (9 meters wide and 50 high!) representing the Marianne and supported by a 15m tall stone plinth. The monument is highly impressive and well worth a visit!

The Place de la Concorde is ideally located in the 11th arrondissement, one of the most fancy, lively and accessible arrondissements in Paris. This is the perfect location to rent a furnished apartment! Lodgis has many apartments, studios, lofts and duplexes available in the La République neighborhood.

The Place de la République: a tribute to the country’s values

It’s at Place de la République that you will find a monument that is dear to the nation’s heart: Monument à la République.

This statue is a symbolic attraction that represents the French nation’s values and identity. The bronze statue of the Marianne symbolizes the République holding an olive branch as a sign of peace, the 3 statues decorating its base represent the motto “liberty, equality, fraternity”, the twelve dates and embossed designs represent the chronology of the République’s history and the bronze lion protects the ballot box of universal suffrage. 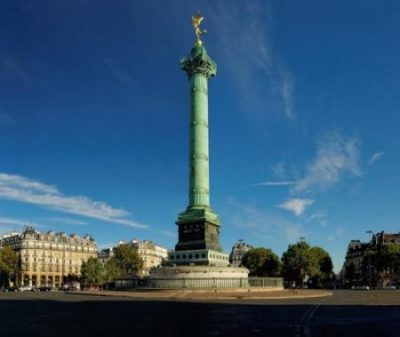 The Place de la Bastille is famous for its huge column. But why is this Parisian square named after the Bastille? Because this was where the Bastille, Paris’ most famous prison, was established. It was “taken” on 14th July, 1789, and destroyed very quickly thereafter (it was destroyed by 14th July 1790).

As a symbolic place of the French Revolution, the Place de la Bastille is also an important Parisian crossroads, where several bus routes and 3 metro lines (1, 5 and 8) meet. Take this opportunity to look around, but do not look ‘up’ for too long, since the 50.52m July Column may make you a bit dizzy…

The place de la Bastille: a symbol of revolution

The July Column commemorates the Trois Glorieuses. This was the 3 day revolution in 1870 against Charles X’s regime that gave birth to the reign of Louis-Philippe.

This is why a monument was erected in the very center of Place de la Bastille and decorated with names of revolutionaries who died for freedom. This is symbolized by the golden bronze statue of the Spirit of Freedom. 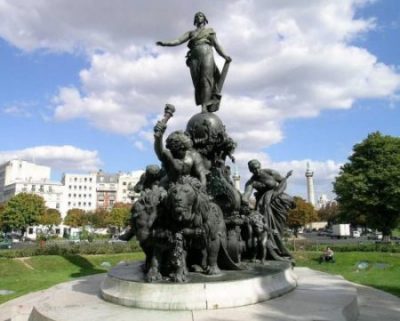 This completes the famous ‘République – Bastille – Nation’ triangle and its name has also changed over time. During the Revolution it was named “Place du trône renversé”, then simply “Place du Trône”, finally becoming Place de la Nation on 14th July 1880, as it is known today. It commemorates the French Republic.

The “Triomphe de la République” symbolizes many things: the republic, the popular strength, the spirit of freedom, justice and equity, work, education, abundance and wealth.
The sculpture shows the Marianne standing on a chariot pulled by two lions. You have to admit that this sculpture is impressive and that it sits perfectly in Place de la Nation.

Are you coming to live in Paris? We prepared an article to help you choosing the Parisian arrondissement according to its atmosphere!