From Chinatown to the XIVth century Chateau de Vincennes

Would you like to discover an unusual side of Paris? Fancy a change of scene from your daily grind? Did you know that it is possible in Paris to travel to Asia then back to the Middle-Ages in less than 15 minutes?

Follow us for a walk that will take you from the Chinese quarter of Paris (in the 13th district) right to a castle that’s symbolic of France’s history, the Chateau de Vincennes. 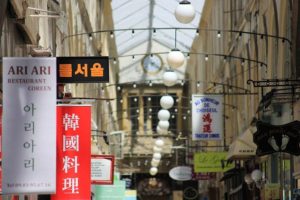 Yes! Did you know that there was a Parisian Chinatown? From Peking duck to Buddhist temples, from jiaozi and baozi to 6-door limousines for weddings, you’ll find all the cultural and culinary specialties you’d want on a trip to China… without leaving Paris!

Where is the Chinese district in Paris?

The French Chinatown is in the 13th arrondissement of Paris. Initially lying between Avenue de Choisy, the Avenue d’Ivry and the Boulevard Massena, Paris’ Chinatown today extends across the surrounding streets around the Olympiades districts.
You can access it by the subway stations Porte d’Ivry (line 7), Porte de Choisy (line 7 and tramway 3a), and also Olympiades (line 14).

Why should you visit Paris’ Chinatown?

The architecture of the Chinese neighborhood of Paris is not as picturesque as Chinatown in London or San Francisco, but the Chinese influence is unrivalled thanks to the multitude of Asian stores.

If you are crazy about Chinese food or if you just want to try some fresh Asian products that you won’t find anywhere else in Paris, go for it!

Two big Tang Frères supermarkets and Paristore offer exotic products imported from China and other parts of Southeast Asia. The place serves as a meeting point for Chinese and Asian people from all over Northern France.

Most importantly, do not miss the Chinese New Year’s Eve celebration that takes place in Paris’ Chinatown between 21st January and 20th February each year. A wonderful parade, with lion and dragon dances, will bring the streets to life with a festive mood.

The Castle of Vincennes 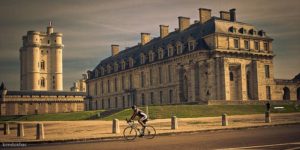 Do you dream of visiting Paris in the Middle Ages? No need to go far! Vincennes and its historic chateau, one of the best-preserved castles in Europe, has everything you could want!

Where is the Chateau de Vincennes ?

The Chateau de Vincennes is situated on the Avenue de Paris in Vincennes, a suburb close to Paris. It is open from 21st May to 22nd September, from 10 am to 6 pm, and from 23rd September to 20th May, from 10 am to 5 pm.

There are several ways to get there. We recommend that you visit the RATP website to find the quickest way to get there.

Why visit the Chateau de Vincennes?

You will be impressed by this wonderful historical site and you will also be able to continue your visit by walking through the picturesque and charming streets of Vincennes. The Castle also has also the huge Vincennes woods and a zoo that you can explore with your children.

How to get from Chinatown to the Chateau de Vincennes in under 15 minutes ?

In Chinatown, at the end of Avenue d’Ivry, take the Tramway 3a «T3a» (orange color) in the direction of «Porte de Vincennes» and get off where it terminates! You will arrive right in the middle of the Avenue de Paris and in front of the Chateau de Vincennes!


Discover more of Paris with our article on 3 Parisian walks to enjoy!