Living and working in Paris: a new chapter

In Behind the scenes

As a Modern Languages student from the UK, I recently joined Lodgis for a six-month internship in the marketing department to assist with the creation and translation of web content.

Initially, I saw this as an opportunity to gain valuable experience in a dynamic property company with an international client base, whilst also improving my French. However, I soon realized that the opportunities here are far greater than that.

Coming from London, I am, of course, familiar with life in a buzzing cosmopolitan capital. But there is something special about the city of light: a plethora of cultural faces together with a strong sense of tradition gives it a unique identity, and different communities contribute to the cultural richness of the capital.

This first thing I have realized since moving to Paris is that the city has layers beneath its face as a tourist destination. I’m now getting to know a magical city that’s filled with temporary exhibitions, obscure passage ways and local boutiques.

I’ve found living more like real Parisians to be a rewarding experience. Instead of extortionate restaurants, I can buy my food from the local markets, butchers, fromageries and eat for a fraction of the cost. Rather than the all-too-frequent emergency Uber, I can use the Metro as much as I like with my Navigo Pass or hire a bike from one of Paris’ 1200 Vélib stations. On the other hand, Paris is a much smaller city than you might think, and can easily be crossed on foot. For example, I can walk to work each morning from Montmartre (Northern Paris, 18th arrondissement) to Bourse (Central Paris, 2nd arrondissement) in less than 20 minutes! 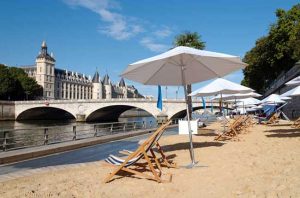 Just 300km from drizzling, overcast London, Paris in the summer is nothing short of glorious. Rooftop terraces, outdoor pools, picnics by the Seine and, of course, the famous Paris-Plages. Every July and August, the river banks are transformed into sandy beaches with palm trees, deck chairs and a plenty of different activities.

Adjusting to life in Paris has inevitably presented its own share of challenges. The first I faced was opening a French bank account. Arriving at the Banque Postale with (what I thought to be) all the necessary documents – passport, proof of address, cheque deposit – I was duly informed that you need a payslip to open a bank account. Conveniently, as it happens, you also need a bank account to receive a payslip!

If you ever find yourself living in Paris and in the same predicament, visit one of the 1739 buralistes agréés (tobaconnists) and open a Compte Nickel. All you need to bring is a piece of photo ID and €20 as a one-off fee. The account gives you a Mastercard allowing you to withdraw cash, make transactions and send and receive payments via telephone and internet banking.

Working a French-speaking office has been an enjoyable challenge during my time in Paris. As a student of Modern Languages (French and Russian), my university course is heavily literature-based. As such, forays into poetry, theater and prose don’t quite prepare you for the day-to-day demands of spoken French.

But I was warmly received at Lodgis and managed to put such apprehensions to rest. I was relieved to find that the office runs in a friendly, convivial atmosphere. In a professional context, all the Parisians I’ve met are also hardworking, efficient and decisive. I admire the passion and commitment of my colleagues, and their ability to strike a healthy work/life balance. Here in the marketing department, team work and autonomy are considered equally vital.

It’s a pleasure to take on such a diverse range of responsibilities and to join such a talented, versatile team.