In Living in Paris, Parisian Lifestyle, What's on in Paris?

In 2017 Paris and its suburbs have some groundbreaking environmental projects lined up to be revealed. Paris is currently being reinvented to combine innovative new ideas and a desire to protect the environment. The capital has some amazing new projects that will be unveiled in 2017 to show bold and futuristic design and the increasingly green side of the city. Read on to find out more about the new eco-innovations that will be revealed in Paris and its suburbs in 2017!

We’re officially living in the future: flying cars are finally available! This international event is one of the most anticipated in 2017.

The Sea Bubble is a new way to travel on the river Seine which should be operational from June 2017. These futuristic electric vehicles will use their tiny wings to fly over the Seine while keeping contact with the river’s surface. The electric cars will be powered by solar panels and electric batteries.

Each one of these bubbles will carry up to 4 passengers from the docks, which are currently being installed, and will offer “zero emission, zero wave, zero noise” transport.

The Oxygen project in the business quarter of La Défense

Among the ecological innovations of 2017 is the Oxygen project in La Défense, a 1000m2 terraced garden with co-working space has been designed by the architectural agency Stéphane Malka Architecture.

This huge project’s goal is to bring some life to Europe’s biggest business district by adding a swathe of green and by combining architecture and landscape gardening!

Its opening is planned for Spring 2017, when a new activity center with restaurants and trendy bars will be unveiled in the very heart of the business center of La Défense.

Speaking of which, does living near one of the biggest business district in the world sound interesting? If so, we recommend that you check out our range of furnished rentals located in the area of La Défense. 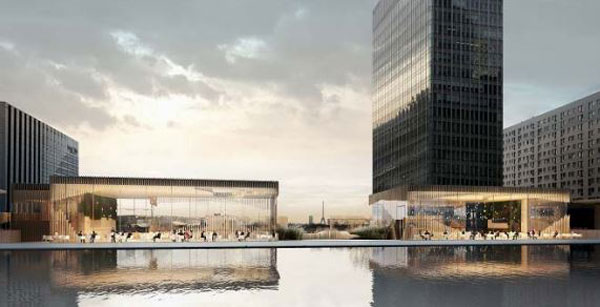 This unique and innovative project in Paris has three different spaces.

The “Zero Waste” team aims to create a place to meet up, learn and work towards one common goal: reducing our ecological imprint.

The first space will be used as “concept-store” where you will find products enabling the changeover to a zero waste lifestyle, as well as a “guideline” space dedicated to offering advice.

In the second space, environmental workshops will allow people to learn “forgotten skills”, such as DIY or sewing. Conferences, film screenings, debates and meet-ups will be organized in order to inform the public about the topic of Zero Waste and how to become more eco-friendly.

Finally, the third space, will host the Zero Waste team as well as ecological demonstrations for companies.


For more green projects in Paris, we recommend that you read our post on Paris Smart City!