About the ice hockey world championship 2017

From the 5th to the 21st May 2017, 16 international teams will compete on the ice for the ice hockey world championship. This is the 81st year of the biggest winter sports event in the world, organised by the International Ice Hockey Federation. For the first time the championship is co-organized by two countries: France (Paris) and Germany (Cologne) with the motto “Together for 2017”.

The 2017 mascots will be our dear Astérix and Obélix!

The 81st year of the ice hockey world championship will feature 16 nations and 64 matches, will take place over 15 days and will be held in the Lanxess Arena in Cologne with a capacity of 18,500 spectators and the AccorHotels arena in Paris-Bercy with a seating capacity of 13,437 spectators.

Find more details and information on the ice hockey world championship 2017, on the event’s official website.

The 81st year of the ice hockey world championship in Paris will take place in the AccorHotels arena at the 8 Boulevard de Bercy, 75012 Paris. It’s the largest multipurpose arena in France and one of the largest arenas in the world. It will be hosting 13,437 spectators for the event from Friday 5th May to Sunday 21st May 2017.

You can buy your tickets online on the official event’s website or at the AccorHotel Arena and Fnac tickets counters.
The price changes according to the match, category and packs you choose: 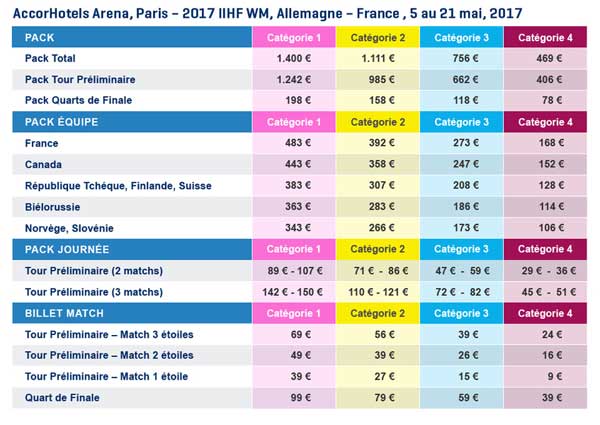 There are several ways of getting to the AccorHotel Arena:

Coming to Paris for the event?

Would you like to plan a trip to Paris for the ice hockey world championship 2017? Obviously the first question that you have in mind is where to stay and Lodgis offers a large range of furnished rentals in the 12th arrondissement of Paris!

Our team of multilingual consultants is totally dedicated to helping you finding the perfect furnished apartment for you and making sure that you get a beautiful and unforgettable Parisian experience. Whether you are alone, with your partner, family or friends, Lodgis offers you all types of accommodation (studio, loft, duplex, triplex, house) according to your needs and your budget. What’s not to like?

Did you enjoy reading this post? For more sports events, don’t hesitate to check out our post about the 2017 Paris Marathon!