“Paris is sizzling in summers”. It might not be summer anymore, but Paris continues to sizzle this winter with massive exhibitions and retrospectives at almost all of the city’s museums and art galleries.

Paris-based art and cultural website Urban Mishmash brings to you a curated selection of six of the most exciting, must-see art exhibitions that the French capital has to offer this season. 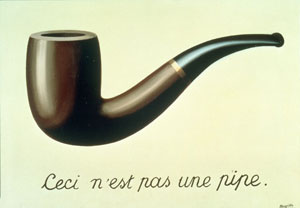 Biggest in the series of Centre Pompidou’s recent monographic exhibitions, the René Magritte retrospective is breaking all records in terms of its popularity. On view until January 23, 2017, the exhibition takes its name after one of his most iconic works La Trahison des images or ‘The treachery of images’. This painting of a pipe, with an ostensibly contradictory text ‘ceci n’est pas une pipe’ or ‘this is not a pipe’ was explained wonderfully by the artist: of course, it is not a pipe, just try to fill it with tobacco. This one is not to be missed, but prepare for long queues. Insider tip: Check Centre Pompidou’s recommended times for a better surrealist experience here

The Shchukin Collection at Fondation Louis-Vuitton – until February 20, 2017 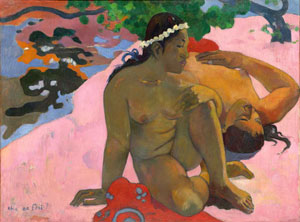 Fondation Louis-Vuitton, Paris recently unveiled a highly-anticipated display of Russian millionaire and art patron, Sergei Shchukin’s historic collection of modern art works. On view until February 20, 2017, the Icons of Modern Art. The Shchukin Collection presents a selection of 127 major artworks by the most important impressionist, post-impressionist and modern artists from France.

The collection which is widely considered to be an important anthology of modern art, includes Monet’s Le Déjeuner sur l’herbe, Cézanne’s Mardi Gras, Gauguin’s Aha Oé Feii? (What, Are you Jealous?), Matisse’s The Pink Studio and Picasso’s Three Women and Composition with a Bunch of Grapes and a Sliced Pear. As per Bernard Arnault, President of the Fondation, “The quality of the works makes this a unique exhibition, one that belongs, without mincing words, to Art History”. The exhibition also touches upon the visual and emotional ‘shockwave’ that the Shchukin collection created due to its impact on the young Russian avant-garde artists with a selection of 30 Russian artworks, including those by Malevich, Rodchenko, Larionov, Tatlin, Kliun, Goncharova, Popova, and Rozanova.

The Icons of Modern Art. The Shchukin Collection
At Fondation Louis-Vuitton, 8, avenue du Mahatma Gandhi, Bois de Boulogne, 75116 Paris
Metro: Les Sablons
Opening hours: Monday, Wednesday, Thursday from 11 AM to 8 PM, Friday from 11 AM to 11 PM, Saturday, Sunday from 10 AM to 8 PM, Closed on Tuesdays.
Price: €16 (Reduced tariff of €10 and €5 under certain conditions)
More information: www.fondationlouisvuitton.fr 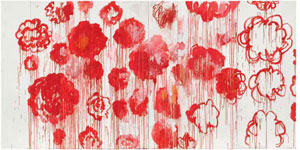 Centre Pompidou recently opened a thrilling new retrospective of critically acclaimed American artist Cy Towmbly’s works. Born in Virginia, USA in 1928, Twombly spent his time between America and Rome (where he established a studio in mid-1950s) and is known for his monumental abstract paintings, filled with his signature scribbles and scrawls. The new Beaubourg retrospective is organised chronologically with nearly 140 works by Twombly, from his first works in the early fifties to his last paintings before his death in 2011. The exhibition also includes a series of photographs taken by the artist between 1953 and 2008, presenting his lesser-known work as a photographer.

American Painting at the Musée de l’Orangerie – until January 30, 2017 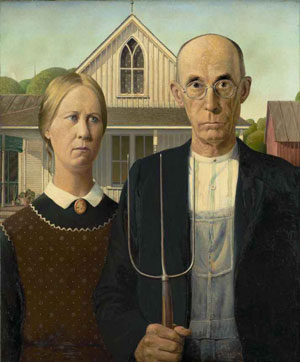 With its new exhibition, American Painting in the 1930s: The Age of Anxiety, Musée de l’Orangerie examines the evolution of American art during the decade following the New York stock exchange crash. This was an era marked by an extraordinary diversity of styles and visions, with American artists questioning what art should be. This intelligent exhibition part celebrates, part re-evaluates, this rather little-known period of American painting with a tight selection of 46 paintings. Some of these paintings have never, or rarely, been exhibited in Europe before. These include Grant Wood’s iconic work American Gothic considered as one of the most significant depictions of Depression-era America. Key figures such as Edward Hooper, Georgia O’Keefe and Charles Sheeler are each represented by their masterpieces New York Movie, Skull and American Landscape respectively.

American Painting in the 1930s: The Age of Anxiety
At Musée de l’Orangerie, Jardin des Tuileries, 75001 Paris
Metro: Concorde²
Opening Hours: Wednesday to Monday from 9 AM to 6 PM. Closed on Tuesdays and December 25.
Price: €9 (Reduced tariff from €6.5 or free under certain conditions)
More information: www.musee-orangerie.fr

Once considered as the star of post-war art in France and a rival to Pablo Picasso, French artist Bernard Buffet is likely one of the very few artists who have known intense fame, followed by an almost universal disdain in his own country. After almost half a century of obscurity in France, Musée d’art moderne, Paris finally has the courage to set this injustice right by showing an outstanding retrospective of Buffet’s work with a selection of nearly hundred paintings from the artist’s prolific oeuvre. A must visit! 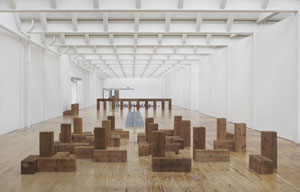 Another major retrospective at Musée d’art moderne explores the full spectrum of major American artist, Carl Andre’s work. Entitled Sculpture as Place, the exhibition explores how the artist redefined sculpture as a means of experiencing space, time and matter by utilising nothing other than standard, unmodified industrial materials. Works on display include 40 largescale sculptures, poems, photographs and works on paper by this leading minimalist artist.

Interested in more updates on art and cultural events in Paris?

Visit Urban Mishmash, a Paris-based art and  cultural website, with features on the most engaging art exhibitions and cultural events in Paris. They also cover offbeat things to do and unusual places to visit in Paris and run a section on inspiring stories about individuals and entrepreneurs doing something meaningful in Paris.