Guide to the French school system

In Living in Paris, Moving to Paris, Paris for families

Navigating the new education system can be tricky when you’ve just moved to Paris as an expat. So to help you out, we’ve created a guide to the French school system for expat families.

If you decide to send your child to a state school in France, you will be allocated a place at the nearest nursery or primary school by the mairie according to where you live. It is possible to request for your child to be sent to another school, but you will need the mairie’s permission, and these requests are not always granted.

For more information and to find your mairie, click here.

School term dates depend on where you live. France is divided up into three zones, which each have different term dates. The start of term in September and the end of term in July is the same for all schools across the country, as well as the Toussaint (All Saints) and Christmas holidays.
However, the spring term dates are staggered to avoid overcrowding during the holiday season. 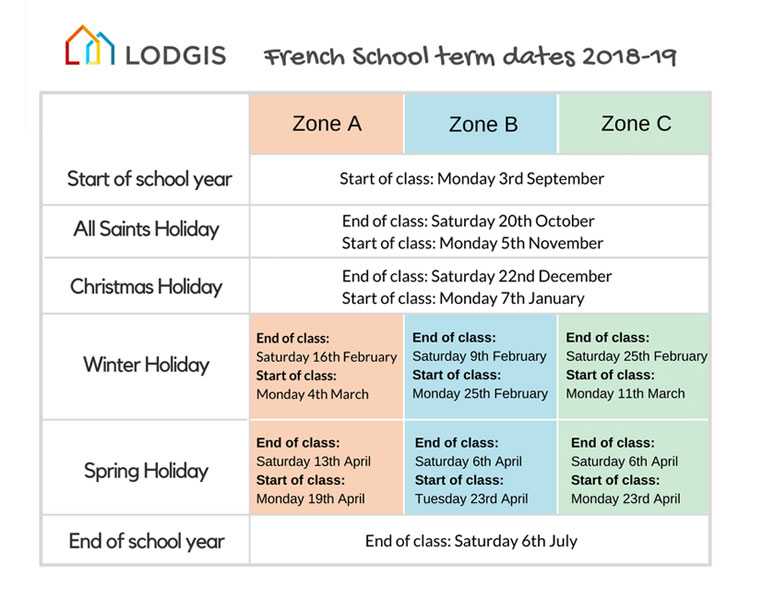 Generally speaking, the school day in France is from 8:30 until 4:30, but it varies depending on which area you live in. This is longer than the typical school day in the UK or America, but there is a longer lunch break and two other breaks during the day. There are 24 hours of lessons a week.

Local authorities have the freedom to choose the length of the school week. Not all primary schools have classes on Wednesdays, and some only have classes on Wednesday mornings, but it depends on the area. Normally there are other extra curricular activities proposed on Wednesdays, which are offered by the mairie. Some schools offer early-morning or after-school clubs, which are also organised by the mairie. Although school is free in France, you have to pay for these extra activities.

You can find all the information about the school hours in your area by clicking here.

Lunch breaks are much longer in French schools: usually at least one and a half hours! Students have a choice between eating at the school canteen or going home for lunch. Bringing your own packed lunch is usually not allowed, which is usually a popular option in the UK and America.

However, children with food allergies can bring a packed lunch, providing they have a doctor’s note to prove it. Some schools offer a choice in the menu to accommodate religious based dietary requirements, with kosher or halal meals available, but this is not a compulsory requirement in French schools.
For more information about allergies and school meals, click here.

Class sizes are generally bigger: there are around 30 students in a class with one teacher (and an assistant in maternelle).

French children do not wear a school uniform, which is normally compulsory in British schools.

Learning a foreign language begins in primary school and a second language is introduced in secondary school. The main languages taught are English, Spanish and German, but it depends on the school in question.
For more information about language programmes in schools, check out our article on international schools.

State education in France is secular and so religious studies are not part of the national curriculum. Religious symbols are not permitted for students or teachers. There are no nativity plays at Christmas and religious holidays are not celebrated at school. There are no ‘Easter’ holidays as such (like in the UK), instead there is a ‘Spring holiday’, which won’t necessarily include the Easter weekend and varies depending on which area of France you live in.

This can be one of the most confusing aspects of the French education system for new expats. The French system counts down from Year 11 to Year 1 and finishes with terminale, whereas the class system in British and American schools is in ascending order, starting with Year One/1st grade and finishing with Year 13/12th grade. 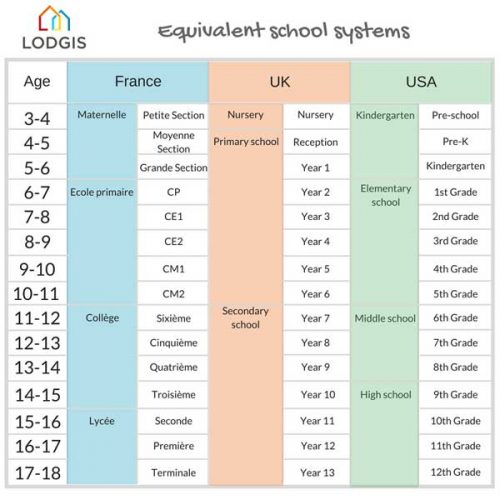 It’s worth noting that from September 2019, education in France will be compulsory from the age of 3, meaning all children will have to attend nursery.
At the end of collège, students take an exam called le brevet which is the equivalent of GCSEs in the UK and the high school diploma in the USA.
At the end of lycée, students take an exam called le baccalauréat (or bac) which is the equivalent of A levels in the UK and AP tests in the USA.


Once you get your head around the new French school system, you’ll realise that it’s not so different after all!


Did you find this article useful? For more expat information, check out our article on the best neighbourhoods for families in Paris.