Paris metro maps: from the traditional to the unique

In Discover Paris, Getting around in Paris

You’re probably familiar with the normal map of the Paris metro, with the numbers and colors of its lines…But did you know that there are other versions of the Paris Metro map? Don’t worry, Lodgis is here to share these different Paris metro maps, from the traditional to the utterly unique!

Between 1916 and today, the Paris Metro map has changed dramatically. . It’s become increasingly easier to read between the lines of the metro.… And its also changed in revolutionary ways such as suggesting the nicest bar near your station or the best burger restaurant on your line.

Before we look back at former Paris Metro maps, here is some information on the traditional Parisian metro map.

There are 14 metro lines in Paris. Each metro line is represented by a number, a color and two directions that correspond to the stations at each end of the line (metro lines runs both ways, so make sure you don’t get confused about which direction you’re going in).

To reach your destination, identify which station you’re at on the map. Then find the name of the station you wish to go to. Finally, follow along with your finger to join the two stations together and take a note of the numbers and colours of the metro lines that you’ll be taking.

You’ll need to change where two lines intersect. You can change from one line to another by following the signs on the platforms (make sure you get the right direction!).

On the metro map, if the line number is preceded by a «T», this means that it’s a Tramway line (a kind of outdoor metro, it has three lines that run across the city of Paris). If it’s a letter between A and E, this means it’s an RER line (the Réseau Express Régional, a rapid transit system between Paris and its suburbs).

The thick blue line across map is the river Seine. You can also get around by boat. 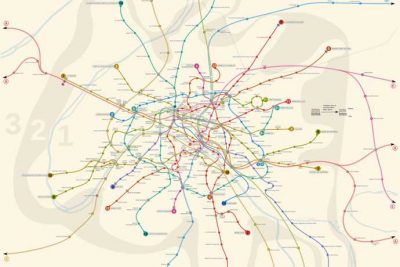 A map of the Paris Metro

The Metro Map for Burgers in Paris

An essential tool for getting around in Paris, the «traditional» Paris Metro map has been transformed for entertainment… From the burgers of Paris to a map of Parisian bars, you’ll be sure to have fun… The blog of Fraisfrais (in partnership with Sayfat) invites you to discover Gourmet Paris, by renaming each Paris Metro station with the name of the best burger in the neighbourhood…

Also, if you’re currently thinking “OMG I’d love a good burger but don’t know where to find one!“, Lodgis is about to change your life. You can simply refer back to this special map of the Paris Metro and find what you’re after. You’ll find everything from the Parisian burgers at Big Fernand to the classic American burger at Paris New York (PNY)!

Using the map is simple, as it works just like the traditional metro map: identify which metro line you’re taking, count the number of stops to your chosen restaurant, get off at the right station…and treat yourself to a meal!

Are you going out in Paris this evening but don’t know where to go for a nice drink that’s too far? This map of Paris bars by metro station was created by Thrillist and is just what you need! The idea is simple: to show you the best bar within ten minutes walking-distance of the metro station you’re at.

How does it work? Choose a bar, find the corresponding line and metro station, work out the number of stops between you and the bar, get off at the right station and…drink responsibly! 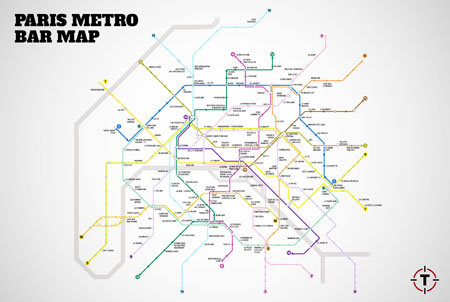 Did you enjoy this article? Then you will love discovering the street food parties in Paris! Bon appétit!