As the 3rd largest city in France and with a history dating back for over 2000 years, Lyon is a city with a lot to offer. You will never run out of things to do here despite the city itself not actually being too big. There are many cultural options to visit such as museums, galleries and monuments, as well as places to relax like parks, nightclubs and some great restaurants serving some of the best food in France, maybe even the world. Here is our selection of things to do in Lyon. 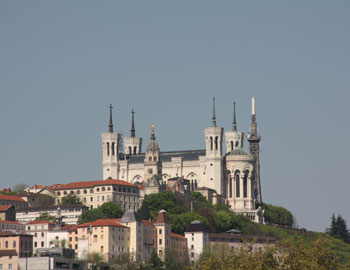 The Basilique de Notre Dame de Fourvière, known as the upside down elephant to the locals, sits at the top of the Fourvière hill overlooking the city of Lyon. From the basilica, you are met by some stunning panoramic views of the city. It was built in the 19th century and it is dedicated to Virgin Mary who is said to have saved Lyon from the Black Death which is now celebrated on 8 December every year as the Fête des Lumières (Festival of Lights). You can get a guided tour of the basilica and members of the public are occasionally allowed access to the basilica’s north tower for a spectacular 180° view of the city and its suburbs. Inside the basilica there are beautiful mosaics made with vibrant colours depicting scenes from the life of Jean d’Arc and biblical events. It attracts around 2 million visitors annually, so this is definitely a must-see for any visit to Lyon.

The Musée des Beaux-Arts is in a former Benedictine convent from the 17th century and is housed near the beautiful Place des Terreaux. It was opened to the public in 1803 and was restored in 1998. Its collections range from ancient Egypt antiquities to Modern art. It’s one of the largest and most important art culture museums in France and the whole of Europe. The museum has 70 rooms filled with a range of exhibitions from all around the world including medieval pieces, antiquities, art, sculptures, modern art, etc. This is a great museum to visit to see some of the most famous and important works throughout history, so take your time while exploring this grand museum. 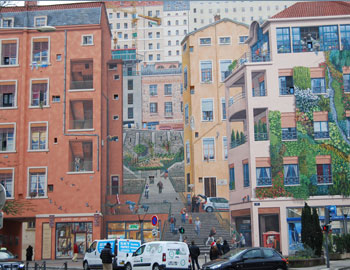 There are over 100 murals that cover the walls of Lyon with many of them telling a story about Lyon’s history. It is second only to Berlin in Europe in terms of the amount of frescoes that the city has. The most impressive and probably the best-known mural is the ‘Fresque des canuts’ (the silk-weavers wall). It is the biggest mural in Europe and it depicts the Croix Rousse district which is famous for the old silk work that went on there. The mural is regularly updated with parts of it being modernised and new bits being added. It is so well painted that at first glance it appears to be multiple buildings, but it really is just one façade. Another great mural to visit is the ‘Fresque des Lyonnais célèbres’ which features many famous people in Lyon’s long history up to the modern day. The murals are a great free way to gain some knowledge about Lyon’s history. 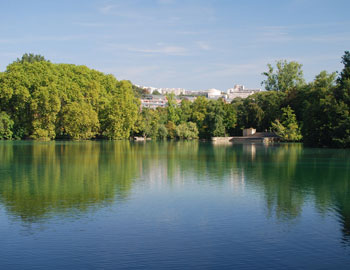 The Parc de la Tête d’Or is one of the largest urban parks in France with an area of 117 hectares. It is located in the 6th arrondissement and has been open to the public since 1857. The park offers a great place in the city to go for a walk to get some fresh air and a bit of peace and quiet away from the animated city. It has a large lake, for which you can rent boats during the summer months. It also has a botanical garden, full of greenhouses with exotic plants and flowers with 20,000 species there, and an African savannah in the zoological park which is free to visit and you can see animals like zebras, giraffes, antelopes, lions, etc. On top of these things, there are sports facilities such as a velodrome, mini golf, a boules court, etc. This park is one of the most beautiful places in Lyon and is a great place to go for families and friends to relax or to do some fun activities.

Le Sucre is a rooftop bar that turns into an electronic music club at night. It plays a key role in Lyon’s cultural scene. It was the first place in Lyon to offer a rooftop which offers a spacious area and some great views of the Saône river and the Fourvière hill. Situated in the Confluence region in the 2nd arrondissement, this unique club offers fun and diverse nights where you will find a different experience to the normal clubs in the city centre. The rooftop gives you a great way to enjoy a lovely after work drink outdoors and with a view.

These are just a small selection of things to do during your time in the city of Lyon. Try to explore the city as much as you can as it’s not the biggest, but still has plenty to offer. Keep an eye out for more articles on Lyon about where the best place to live for you is and also which are the best bars and restaurants to visit in this major French city.

If you are looking to rent a property in Lyon and for more information on our services, click here


If you would like to learn more about Lyon in general, check out our article Discover Lyon