Following the footsteps of Édith Piaf

This week we commemorate the death of Édith Piaf, the Parisian singer, songwriter and actress considered one of the most iconic talents and performers in French history.

Nicknamed “The Little Sparrow” on account of her delicate stature and shyness, Piaf rose to fame during the 1930s in the racy district of Pigalle. During the Occupation she served as an iconic symbol of French resistance.

And yet despite her widespread success and great influence, much of Piaf’s life remains shrouded in mystery. Her glorious legacy is tarnished by the reality of years of addiction that led to her tragic death at the age of 47.

In this article, we’ll explore 5 locations in Paris that represent part of Édith Piaf’s extraordinary story.

According to her birth certificate, Piaf was born Édith Gassion on December 19th, 1915, at the Hôpital Tenon, although she always claimed to have be born under a lamp-post on the pavement at 72 Rue de Belleville. A plaque still rests on the wall at this address to commemorate the legendary birth of this working-class star. Abandoned by her mother, a café singer, at birth, Piaf was raised by her father and his mother, who ran a brothel in Normandy.

By the time she was a teenager, Piaf had begun performing as a street-artist alongside her father, who was an acrobat. It was around this time that she met Simone “Mômome” Berteaut, with whom she rented a modest room at the Grand Hôtel de Clermont. This charming little bar and guest house is still running today at 18 rue de Véron and remains a relatively hidden spot. But it was at Au Lapin Agile, the quintessential 2-room cabaret club at 22 rue des Saules, that Piaf made her name as a singer. 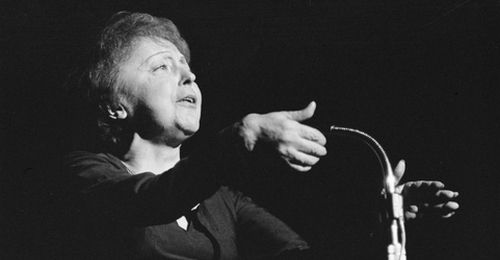 By the time Piaf’s powerful vocals had penetrated the districts of Montmartre, Paris was in the grip of the Occupation under Hitler’s troops. But Piaf continued to perform at exclusive brothels, such as Le Chabanais and Le Sphinx, enjoying heightened success in the face of adversity. Sadly both of these institutions were closed down, but you can still enjoy a delicious meal at the timeless brasserie, La Coupole (102, Boulevard de Montparnasse), where Piaf first performed at the age of 19 and frequented as a customer in her golden years.

This two-room museum is based in the tiny apartment where Piaf once lived in the 11th arrondissement (5 rue Crespin du Gast). As the only museum dedicated to the French singer, it houses much of her memorabilia, including sheet music, recordings, clothes and photos.

Following years of alcoholism and addiction to morphine, Piaf was treated for cancer and cirrhosis of the liver and tragically died, aged 47, on October 10th, 1963. More than 100,000 people came to witness Piaf’s burial alongside her family at the Père Lachaise cemetery in Belleville (16 rue du Repos). You can visit her grave today to pay your respects in the peaceful garden setting, and to many other historic figures, such as Oscar Wilde, Molière, Balzac and Delacroix.

Whether it’s the immortal words of “Non, je ne regrette rien” that inspire you, or Marion Cotillard’s captivating portrayal of Piaf in La Vie en Rose, why not take the opportunity to find out more about this iconic French singer by visiting some of these historic Parisian addresses?

If you want to know more about Eastern Paris, check out our article on walking in the 12th arrondissement!